What are Wedding Party Poppers? 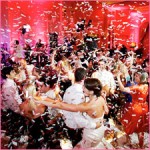 A traditional party popper is a small novelty device that is commonly found at parties and celebrations. Once you have pulled the string, you will hear the loud popping sound of the small friction-activated explosive charge comprised mainly of low-grade gunpowder. It’s a very small amount of pyrotechnic compound, typically less than 16 milligrams total. Other types of party poppers may use compressed air instead of gunpowder, but will make a similar noise and produce the same result when the string is pulled.

Another variation of party poppers is the party popper “revolver”, which features 6 loads of streamers and confetti as well as 6 pyrotechnic charges for propulsion. Much like a real pistol (in “revolving” action only), each time you pull the “trigger”, the party popper revolver goes off and the chamber rotates to prepare the next shot of streamers and confetti. The bonus here is that you can essentially use 6 party poppers in a short period of time since they are ready to go as fast as you can pull the “trigger”.

The end result is an ejection of several small streamers and flecks of confetti out of the large end of the party poppers. The streamers and confetti are non-flammable, so the pose no danger and are safe for use. While party poppers can usually be found at party supply stores or wherever fireworks are sold, they themselves are not actually considered fireworks. Since they are classified as novelties or trick noisemakers, they are typically legal even in states or municipalities that ban fireworks usage altogether. As always, it is best to check with your local and state laws before using party poppers at any event.

About the Author: Wedding Day Sparklers

Wedding Day Sparklers is the nation's leading supplier of wedding sparklers. We offer several different options for couples to use at their wedding including various shapes, sizes, and colors of sparklers.