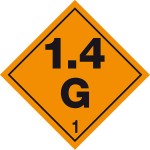 1.3G is the classification given to the large fireworks and pyrotechnics that you see at the shows put on by cities and events. Formerly known as “Class B” fireworks, you typically need training and a special permit to possess or use fireworks of this grade. Most commonly, 1.3G fireworks are handmade by highly trained pyro technicians that are employed by the company hired execute these large scale shows.

1.4G is the classification given to the smaller fireworks that you can typically buy at your local fireworks store. Formerly known as “Class C” fireworks, you typically do not need training or a special permit to possess or use fireworks of this grade. However, some states do not allow the use of 1.3G fireworks of any sort, or have restrictions on the size, type, or time period in which they may be used. Please review your local and state laws or checkout our state fireworks laws section for more information.

Other Common Terminology for Fireworks Types

While not necessarily official, there are several other terminologies associated with different types of fireworks classifications. We have compiled a list below of some of the most widely used terms.

A term given to fireworks such as wedding sparklers, snaps, and snakes that are not really lumped together with the rest of their fireworks brothers. Basically, anything that doesn’t have a fuse can be considered a “Novelty” item. Novelty items can typically be shipped via ground transit without any special paperwork or hazmat labeling.

Another term given to certain lightweight items, similar to “Novelty” items. This term includes such items as caps, party poppers, and snappers. They are generally not considered “fireworks” and are sold almost everywhere in the U.S. They are typically not regulated by U.S. fireworks classifications.

A fireworks classification used by some states that refers to items that only produce smoke not being considered “fireworks”.  This allows the sale of smoke items in certain states when “fireworks” are otherwise not legal.

A term given by a specific state that refers to a subset of the “Consumer” 1.3G fireworks classifications that can be sold in that state. In general, “safe and sane” fireworks usually include items such as fountains, sparklers, smoke balls, snakes, ground spinners, pinwheels, novelties, and toy trick noisemakers. With little exception, consumer fireworks not included in the “Safe and Sane” concept include firecrackers, rockets, aerial shells, roman candles, and any novelty firework or combination firework device that includes these types as part of the design or performance.

*Please note that while we always attempt to keep this section up-to-date with the latest fireworks classifications, we cannot guarantee the accuracy of this information. This information is for reference purposes only, and you should check with your state or local government for accurate information. Wedding Day Sparklers is not responsible for errors in the information on this site, and will not be held responsible for any violations of the law.

About the Author: Wedding Day Sparklers

Wedding Day Sparklers is the nation's leading supplier of wedding sparklers. We offer several different options for couples to use at their wedding including various shapes, sizes, and colors of sparklers.

WINTER SALE - 10% OFF ALL SPARKLERS! | FREE SHIPPING ON ORDERS OVER $50!**LIMITED TIME ONLY - FREE SEND-OFF DISPLAY KIT WITH ANY ORDER! Dismiss