Sparklers at a New Year’s Party: A Thousand Words #2

Welcome to the second edition of “a thousand words”. This story is called the “Sparklers at a New Year’s Party”. While a picture is worth a thousand words, sometimes words can help to add context.

New Year’s parties are notoriously wild, fun, and incredibly memorable. So, it’s only natural to spice things up by using sparklers or other fun novelties to make it more exciting. However, most people simply use their chosen items as the clock strikes 12am, but some people take it a step further. For instance, Sharon threw a huge party for all of her friends, and she found many great ways to use sparklers at a New Year’s party. Here’s her full story.

A Little about Sharon

Sharon is a 28 year old woman living in Portland, OR. She has a very good career at an architecture firm in the city, but it demands much of her time. In fact, she often works very long hours and even goes o the office on weekends. As a result, Sharon doesn’t have time to hang out with her friends or family during most of the year. She loves her career, but when it is time to party; she really lets her hair hang down!

One day in November, she decided that it was time to have a really big gathering. After some careful thought, she decided to throw a huge New Year’s Eve party at her house. However, she wanted something that would really set her event apart from the parties she had attended in the past. After weighing out a lot of options, she settled on using sparklers for her New Year’s celebration.

Saying Goodbye to a Friend

Unexpectedly, Sharon’s best friend, Gabby, confided that she was likely moving away soon. Her husband, Grant, had landed an amazing job in southern California. Sure, driving from Portland to San Diego isn’t an absurd feat; but it meant that the two would not see each other on a daily basis.

Though Sharon was obviously upset, she was also very happy for her friend. So, instead of pouting about the move, she had a really great idea. What if she incorporated Gabby’s farewell into her New Year’s Eve party? It was at that moment that seeds were planted for one of the greatest celebrations of all time!

With an idea in mind, it was time to plan the details. First, she needed to get her basic decorations together. A quick trip to her local party store accomplished that task quickly. Next, she needed to get champagne. So, she ran to the liquor store. The easiest choice was to have Chipotle cater the event; that was decided right when she decided to have an event. All that was left was deciding on sparklers; and that proved to be more difficult than originally anticipated.

Which Type of Sparklers at a New Year’s Party?

Typically, choosing the right type of sparklers for your event isn’t very difficult. Moreover, the type that you choose doesn’t usually play a tremendous role anyway. However, she wanted them to be integrated into her event in several different ways; so that required a lot more thought and effort. Luckily, she sent me a message ahead of time and I was able to help her pick the perfect items. Here are the events she decided on, as well as which type of sparklers she used for that purpose. 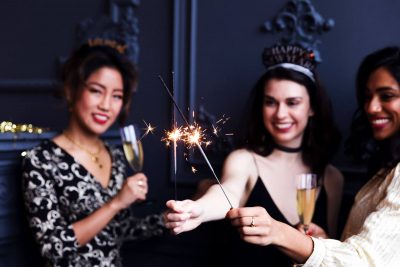 I’ve always been a huge fan of candid photos in people’s scrapbooks. Whether it’s at a wedding, a birthday, or a graduation, the candid photos are by far the best. She decided that having sparklers lying around for these types of moments was a great idea. I suggested our standard gold version, and 10 inches was a sufficient length for this type of situation. This gave her guests something fun and led to some very captivating pictures!

One of the best parts of a New Year’s party is the champagne toast. Other than the drunken speeches given at weddings, these are probably the most revealing and memorable. However, is there a way to give a champagne toast with sparklers? Simply put; yes.

I suggested using the same ones she got for her candid photos to be held as the toast is given. However, I also suggested taking things up a notch. Each time she opened a new bottle of champagne; she attached and lit one of our gold bottle sparklers. This grabbed everyone’s attention, and it commanded the respect of the entire room!

One unique idea that Sharon had was to have a “farewell exit” for Gabby using sparklers before she left to start her new life in San Diego. Luckily, this idea is used all the time at weddings; and that happens to be my specialty. Based on her guest list of 30 to 40 people, I suggested a length of 20 inches so they would last long enough for the goodbye tour. They also happened to be the least expensive option for her needs. She had everyone lineup at the door to see her off; and it was a tearful, yet happy, moment. 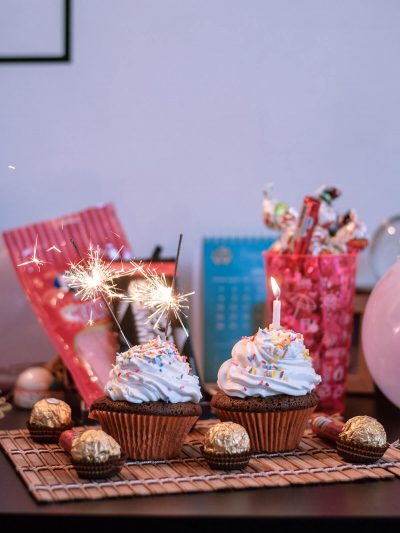 Of course, what New Year’s party would be complete without a midnight countdown? Though simple in principal, this is by far the best way to use sparklers at a New Year’s party. Just hand them out and light them with 10 seconds to go. They will add a cool ambiance during the countdown, but it will also through the hugs, kisses, and songs.

Lastly, she wanted to have something delicious for a late night snack to recharge her guests. Sharon fancies herself quite the baker, so cupcakes immediately came to mind. However, rather than decorating them with intricate designs, I suggested adding a cake sparkler to each one. It was a great way to cap off her series of activities, and it made a huge statement that here guests will remember forever.

Overall, the party went off without a hitch; and the proof is in the pictures! Not only did everyone have a great time, but she managed to hold true to her vision. In fact, I believe we created several new ways to use sparklers at a New Year’s party together; and that is something truly special to be a part of.

Though this is just a simple photo, the memories and the story behind it will last for a lifetime. What may only seem like a picture can mean so much more to the people who were there. The way that Sharon integrated sparklers in so many ways made a lasting impact on the lives of her guests. However, the farewell that Gabby received will certainly be remembered for a lifetime.