Releasing Sky Lanterns as a Group: A Thousand Words #7

Welcome to the seventh edition of “a thousand words”. This story is called “Releasing Sky Lanterns as a Group”. There is an old adage that a picture is worth a thousand words. However, combining that picture with a thousand words of context is even better. In this edition, I will share the story of this image and the experiences behind the camera.

Sky lanterns have been growing in popularity for years, especially at weddings. Releasing them as a group is particularly trending because of the unbelievable spectacle in the air. One couple, Thomas and Jesse, decided to go all-in with their display. Here’s how it all unfolded.

Dreams of an Illuminated Sky 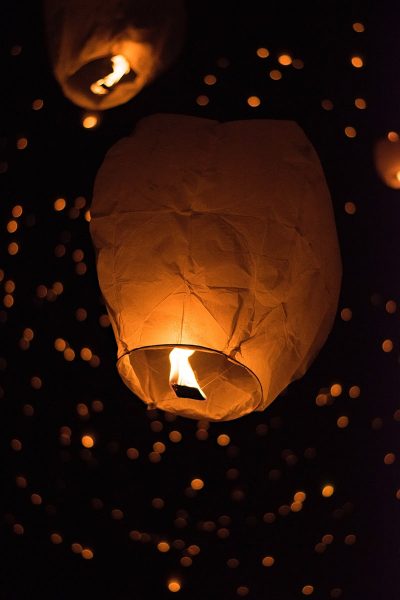 Thomas and Jesse have long dreamed of illuminating the sky on their wedding day with sky lanterns. It all started after their daughter, Janelle, fell in love with the movie Tangled. Anyone who has seen that movie knows how sensational they made these items look! When they saw how delighted they made their daughter, Jesse began researching on the internet the various ways to incorporate them into their celebration.

After hours of searching, it became clear that this was a very popular concept. Additionally, there were many great options available for this specific purpose. However, it was also clear that some real thought and planning was going to be needed. Between choosing a venue and coordinating the group release, there are truly a lot of details behind this picture.

Choosing a Venue for Releasing Sky Lanterns as a Group

Thomas and Jesse live in Texas, and that is helpful if you plan on releasing sky lanterns as a group. Unfortunately, there are many areas of the country where their use is prohibited. Additionally, even if you are in an area where they’re allowed, there are other considerations.

First, you need to make sure you have a nice open area. Typically, there will be 50 people or more involved in a release so a large clearing is required. Furthermore, obstacles like trees and buildings in the surrounding areas are also problematic. Unlike using sparklers for weddings, sky lanterns need a clear path into the air. So, Thomas and Jesse needed to think carefully about their venue choice.

Fortunately, Texas has thousands of miles of coastline along the Gulf of Mexico. So, that is where the couple decided to have their event. Not only does the beach offer open spaces without and obstacles, but it also adds a beautiful backdrop for the show. Lastly, choosing the Gulf coast ensures that the westerly winds would carry the lanterns out over the ocean instead of over neighborhoods of unsuspecting people. Though they are generally required as safe, it’s polite not to create panic.

There are a variety of different types of sky lanterns available, so choosing the right version can require some thought. There are white ones, colorful ones, heart shaped ones, and even versions that produce a trail of sparks as they rise to the heavens! However, for most weddings, it comes down to a very simple question: are you planning to decorate them or not? For Thomas and Jesse, decorating them was definitely going to be part of the process.

After some careful consideration, the couple decided to go with white sky lanterns instead of colored versions. At first, they were leaning towards having multi-color options to create a more diverse appearance after the release. However, when they factored in decorations and the lower cost of the white type, it seemed like the best choice. Once they had settled on the color white, it was time to figure out how they would be decorated.

One of the oldest traditions surrounding these items is to use them as wish lanterns. This involves writing messages of hopes, dreams, or well-wishes on them before you do the group release. However, you can take it a step further by adding stickers and paint to the designs.

This couple decided that it would be a really fun activity for their guests to take the time to decorate their lanterns before the coordinated show. Not only would this emphasize the meaning, but it would also provide an additional activity to eat up time during the reception. By making it a two step process, you get to maximize the fun and get more value out of every dollar spent!

Organizing and Coordinating the Release

Having your ducks in a row is one of the most important factors for success in any arena, but releasing sky lanterns as a group requires additional coordination. First, you need to figure out a plan for educating your guests on how it all works. Not many people are familiar with these items or how they function, so having a plan matters. Thomas and Jesse decided to spend 20 minutes prior to the launch to go over the details.

Next, you need to group people into pairs. Having two people participate in each launch is by far the easiest way to go. Fortunately for the couple, most of their guests were already married so grouping them up was simple. However, having a plan is crucial because everyone’s guest situation will be a bit different.

Lastly, timing is also vital. You obviously want everyone to release them “at the same time”, but they need to be staggered at least a few moments apart to avoid chaos. Thomas came up with the idea to create three sub-groups for timing. After group one launches, group two counts to three and goes. Then group three would follow suit. By spacing the three groups out along the beach, this ingenious technique provided optimal spread and coverage without any chaos. Whether you’re in Texas or having a destination wedding in Alabama, this method is excellent!

Capturing the Magic of Releasing Sky Lanterns as a Group

Once the launch has occurred, preserving the memory is where most people’s attention turns. This couple had a wedding photographer on hand for capturing still pictures. Additionally, they setup their camcorder on the hill overlooking the beach to capture every moment on video. However, the best images and video ended up coming for the smartphones of their guests. After they release their lanterns, they were encouraged to pull out their phones and start capturing the magic. With over 50 phones working together, some of the images were quite spectacular.

At the end of the day, we selected one of those pictures to be the main feature of this post. I feel this photo captures the very essence of what all couples are trying to achieve when releasing sky lanterns as a group. In my opinion, they did about as good of a job as you could ever expect at a wedding. Good luck with your upcoming wedding, and I hope you enjoyed the story!

If you have a story to share, don’t hesitate to contact us. If you send a great photo and background story, then perhaps you could be featured in the next edition!

FALL SALE - 10% OFF ALL SPARKLERS! | FREE SHIPPING ON ORDERS OVER $50!**LIMITED TIME ONLY - FREE SEND-OFF DISPLAY KIT WITH ANY ORDER! Dismiss