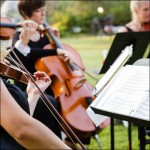 Everyone planning a wedding is familiar with the concept of ceremony music, and most of the time they already had a few pieces of music in mind before they even got engaged. The ceremony music really sets the scene for the entire event because it is literally the soundtrack to your shared love. However, many people are not familiar with a lot of the terminology surrounding ceremony music, or at best they are familiar with terms such as processional and recessional that are very commonly discussed terms. Just in case, we’ve included those and several other terms in our guide to wedding ceremony music terminology below, as well as few classic examples of music choices for those parts of the ceremony.

As you can see from the above list, there are many different parts of the wedding ceremony for which you will need to choose music. Like most things you’ll need to plan for your wedding, it is actually much more labor-intensive than it originally seems. Hopefully our guide to wedding ceremony music terminology above will help give you a firm grasp on everything you need to consider, as well as a few example of the songs that you can choose.