A Couple’s View During a Sparkler Exit: A Thousand Words #11

Welcome to the eleventh edition of “a thousand words”. This story is called “A Couple’s View During a Sparkler Exit”. Capturing your favorite moments from your wedding in pictures can be the easiest way to take a trip down memory lane. However, adding a description can be very helpful to remember the feelings that were present during the moment, too. In this edition, I’ll talk about the moments leading up to these pictures and what the original plan was. Hopefully, it will make you feel like you were there and part of the action!

One of the most popular ways to use sparklers for weddings is during the sendoff line or grand exit. Not only does it allow your guests to get in on the experience, but it offers a magical view for the couple. Rebecca and Juan are a very young couple, and they love to embrace technology. However, they have a lot of older family members that enjoy embracing tradition. As millennials, they decided to combine the two approaches and film everything in POV fashion. Meanwhile, they would have a photographer capturing the action from other angles. Here’s how they made it all happen and how it turned out.

Since much of the event was to be rooted in tradition, Rebecca and Juan needed to be careful about which activities they chose to embrace. To start, they decided to have most of the traditional elements. These included dancing, champagne toasts, a cake-cutting ceremony, and a sendoff line at the end of the ceremony. However, they wanted to spice things up, so they hired a mariachi band for the entertainment. Furthermore, since it was beautiful outside, they decided to add sparklers to their summer wedding exit experience.

However, they read online that filming sparklers from the couple’s view can be quite challenging. You need to have all the right equipment, plus you need to do several practice runs. Additionally, you need to choose the right products to ensure they show up properly in the video. Once they settled on using sparklers as their accessory of choice, it was time to choose the version that would work best.

Choosing the right sparklers to capture properly on video takes a lot of thought and effort. First off, they need to last long enough for you to complete the entire exit. However, they also need to be bright enough to show up. Since Juan and Rebecca were having their event outdoors, it opened up a lot of different options. Outdoor events don’t require smokeless sparklers because of the fresh air, so everything was on the table. Here’s how they examined the options and finally settled on the right choice.

Choosing a version that creates colored sparks is a great option when the event is being held outdoors. Colorful sparks are much more aesthetically pleasing than regular gold sparks, and there are no smoke concerns in the wide open air. However, the pigments also create a very important downfall; they aren’t as bright as the other alternatives. Since the main goal was to capture the event on video, choosing a colorful sparkler was less than ideal. They purchased a small package to test them out, and the results were not what they wanted. Fortunately, they ordered another version to try that ended up being the perfect fit.

In the end, a traditional gold version is what the couple settled on using. During the test phase, they used 20 inch sparklers for weddings and they were very pleased with the results. Additionally, they lasted for the perfect amount of time to complete their entire exit! Even more exciting was the fact that they would only costs about have of what the color option would have. With all those savings, they are able to buy a few other products to enhance their reception; but I’ll get into that more a bit later.

Capturing the Couple’s View During the Sparkler Exit 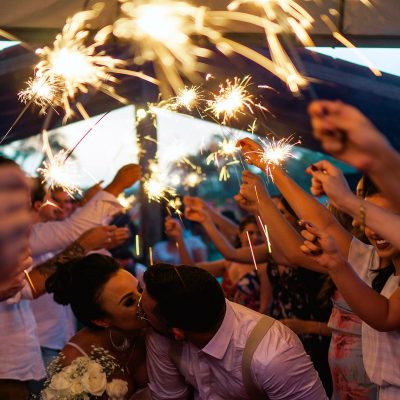 Once they had their sparklers picked out, they needed to work on how they would take the video. Juan had some experience as a videographer, so he knew that the equipment needed to be correct to get it done right. Fortunately, he had access to a GoPro camera that could capture the entire event in high definition.

At first, he considered simply holding the camera as they made their way through the sendoff line. However, Rebecca wanted to be able to reach out and shake hands; as well as stop occasionally for kisses with her husband. So, they decided to use a headband that would attach the camera to Juan’s head. That way, they could capture the couple’s view during the sparkler exit while keeping their hands completely free. As you can see from the photo above, the results were beyond what even they expected.

Other Parts of the Celebration

As I mentioned before, their choice of sparklers freed up some additional budget room for other items. They didn’t really need any extra decorations, and all the main components of their wedding were already accounted for. So, they decided to buy some bottle sparklers to enhance their champagne toasts! Best of all, they didn’t tell anyone about their plans ahead of time. When those sparkling bottles were brought into the reception area, it definitely took everyone by surprise!

Is Attempting to Capture the Couple’s View During a Sparkler Exit Right for Your Wedding?

Trying to capture a couple’s view during a sparkler exit can be a lot of work. However, as you can see the photos turned out amazing! Better yet, they have a great video of the entire experience shot from their own point of view. But before you decide to do this at your event, remember all of the steps that Rebecca and Juan had to go through. They had to get the right equipment, choose the right sparklers, and then test things out to fine tune the process. Fortunately, Juan had some experience which really came in handy. However, if you don’t have videographer experience, make sure you allot plenty of time to figure things out. If you’re dedicated, you too can capture amazing pictures and video to cherish for a lifetime!

Hopefully, you found this story entertaining; and perhaps even inspiring. Don’t forget, we want to hear your story, too! If you have some photos and a great story to share about them, please contact us with the details for our editors to review. Who knows, maybe you’ll be featured in the next story. Until next time, be safe, be creative, and have a fantastic wedding!