5 Wedding Cakes from Around the World

If you’re from the U.S., odds are when you think of a wedding cake you imagine three round tiers. They are mostly white, and decorated with a floral motif; occasionally adorning candles or cake sparklers for added flare. But in other cultures, they are substantially different–some are pastry, some fruitcake, and some aren’t even edible! Here are a few wedding cakes from around the world to add a cosmopolitan, globe-trotting feel to your special day.

Kransekake is the traditional Norwegian wedding cake. It is also used for other festive occasions such as Christmas or New Year’s. It’s a tower of almond-flavored, dense cake rings, decorated with swirls of white icing. Since the cake is ring-shaped, the center is hollow. It’s customary for it to be built around a wine or champagne bottle. This method holds the cake’s structural integrity and provides a gift for the couple after the cake’s been eaten. If the happy couple are teetotalers, it can also be filled with chocolate, candy, or other treats. Though traditional in Norway, this is definitely not a traditional wedding cake!

France’s traditional wedding cake is less a single dessert and more a tower of tiny puff pastries held together with honey or glaze. The elaborate construction can be several feet tall, comprised of hundreds of cream-filled pastries, and is served with a number of dipping sauces. If your guests don’t mind the sticky fingers, it’s a light and airy alternative to traditional dense cake. It certainly makes for a striking centerpiece at any reception.

In Jamaica, the traditional wedding and Christmas cake is a dark, dense bread-cake made with rum and tropical fruit. It’s topped with nuts and pineapple, and more resembles English fruitcake than a traditional style. Though unusual, this definitely makes the list of the top five wedding cakes from around the world. It’s delicious! 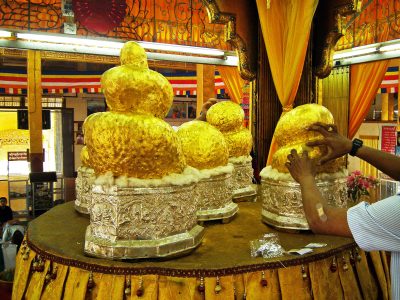 Japan: Too Beautiful to Be Real

In Japan, the wedding cake presented at the reception is an elaborately-decorated phony. The “cake” is covered in gold leaf and other fancy refinements, but it’s inedible. Sometimes it will have a groove built into it for the bride and groom to mime the cake-cutting ceremony; other times, it’s purely decoration. The guests at the reception dine on plain old sheet cake brought from the kitchen. It’s a tradition that looks more tempting as modern cake decorations get more and more elaborate and less and less appetizing. Wouldn’t you rather have a frosted piece of sheet cake than have to peel fondant from a cake made primarily for its structural stability rather than flavor?

Bermuda: “His and Hers” Wedding Cakes from Around the World

In Bermuda, there are two cakes: one for the bride and one for the groom. The bride’s cake is a multi-tiered fruit cake which is frequently covered in silver leaf. The groom cake is a pound cake; smaller, but covered in gold leaf. Instead of a plastic bride and groom for a cake topper, the topper is traditionally a live young sapling, which the bride and groom can plant together so it can grow as their love grows.

Whether it’s a spice cake, a fruit cake, or a towering pastry construction, the wedding cake provides a centerpiece for the reception; and a sweet treat for the end of an exhausting day! Just don’t feel bound to that multi-tiered classical cake; these five wedding cakes from around the world should inspire you! If you’re feeling adventurous, one of these cakes could make your reception that much more memorable.